A Pig Butchering in Pico

As people kept referring to farms in the Azores – often right in the centre of towns and villages, we would look around expecting to see an expanse of field, and never find it! All we could see were houses, and trying to be polite (and not wanting to look foolish that we did not see something that was perfectly obvious to them), we refrained from exclaiming “Where? Where?!”.

Later we discovered that everywhere, in town and countryside, there were tiny stone-fenced corrals about five to ten feet square. Apparently these little corrals behind the houses made up the “farms”, the cutest tiniest little farms we’ve ever seen!

In these small corrals, one might see a few black and white dairy cows, a pig or two, a few chickens or geese, the odd goat, a vegetable garden, or some fruit trees. Behind this house you see a cow, a donkey, geese and chickens.

Keeping animals behind your house in town was not unusual. Later I learned that a farmer may have additional pieces of land further inland that he would walk to, or ride his donkey or horse or motor-bike-cart to, each day. Occasionally, you will find what might be called a Farm Village of 5 or 6 homes with little farms behind or near them.

Still the average farm is only five to ten acres in size and as far as the eye can see in every direction and on every island there is a patchwork of either hydrangea hedges or stone fences. The Azoreans used some ingenuity in making the stone fences since they had to clear the over-abundance of lava rock at any rate in order to make good use of the land. Piling it into stone fences was a logical and efficient use of the stone.

Six of the nine islands – Sao Jorge, Pico, Flores, Corvo, Santa Maria, and Graciosa (in white below) are the smaller, least-commercialized islands, and for my money are the most interesting, having the most lush countryside, and the most genuine people.

In Pico, for example, families share all of their food with everyone else in the community, whether it is a freshly butchered pig or chicken, or garden produce. Friends and neighbors gather together and everyone shares the work and the food.

We were driving through a village in Pico on one such an occasion, and upon obtaining permission to observe and photograph a pig-butchering event, we shared in the laughter and excitement as the men each took on different roles.

A dozen rubber-booted men worked both attentively and jovially at the side of a house in thick mud, and as I tiptoed my way to higher dry ground, a matronly woman rushed over with a glass of homemade wine and a dish of homemade candies. Then they all sat and enjoyed the pig butchering.

There were obviously some young apprentices looking on eagerly, and we noted the homemade scrapers and other handmade apparatus used to butcher and clean the pigs.

We could not help but contemplate how far the average city dweller in Canada is removed from the basics of life. Perhaps few would say that a pig-butchering is an event they would enjoy, but as I tried to analyse why this felt both repugnant and meaningful to me at the same time, I thought that its’ merits must lie in something related to feeling a purpose in life. Perhaps it’s that when we do things that are obviously filling a basic human need, we tend to have more satisfaction with our lives.

On Sao Miguel Island, on the other hand, each family is expected to look after themselves.

The soothing resonance of mooing cows fostered a leisurely pace on our tour of all of the islands. Of course the absence of cities and the prolific vegetation also add to the quiet country atmosphere. Ferns, eucalyptus, faia, cryptomeria, and chorea are only a few of the trees one sees everywhere. Still, the mooing cows and crowing roosters offer a true symbol of a land barely touched by modern man.

There was much enthusiasm with respect to showing us a Dairy factory as well. We expected to see something that we had measured by the big industry standards of North America, or even by the much more modest standards of a small, Canadian city. We were both surprised and delighted by what we saw.

The dairies were so tiny that they would have made a small house. Four or five rooms of sparkling clean cement set up for bottling milk or making cheese and exuding that musky fresh milk smell – that’s all a dairy factory was. 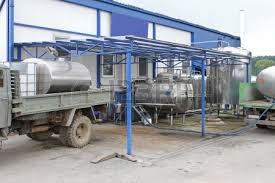 Old-fashioned silver milk cans were piled up outside the door. It took me back many years to my childhood and going to the dairy with my Father. Even then, more than forty years ago, the dairy was bigger than this one was. Typically, the dairies in the Azores were built around the 1920’s and have (delightfully) not changed since.

Many farmers bring their milk to the dairies by donkey.

Or by truck or tractor…

Apparently, there is a trend in Europe where people are now returning to farming in droves. Awww… the simplicity of rural life. Do you not long for it now?

6 Responses to A Pig Butchering in Pico