Dine And Dash At Hemmingway’s Hideout In Old Havana

Dine and Dash at Hemmingway’s Hideout

The very first day we were in Cuba, we were wandering around Old Havana. We stopped for drinks at Ernest Hemingway’s favourite hangout the Hotel Ambos Mundos in Old Havana. Remember? He wrote The Old Man and the Sea, and For Whom the Bell Tolls.

The Hotel Ambos is a lovely hotel inside and out, with a piano and flute player, though we secretly wished the music wasn’t quite so loud.

That is one thing you will notice about Cuba – everywhere there is music and everywhere the music is played loudly. As we sat in the Hotel Ambro, a street music parade went clamoring by the open window.

After a pleasant drink in the elegant lounge, we left the Hotel Ambos Mundos.

We were walking down the pedestrian-only Obispo street about half a block away from the Hotel Ambos Mundos, when a man came shouting after us. Everyone stopped and turned to stare. Que pasa? What’s happening? 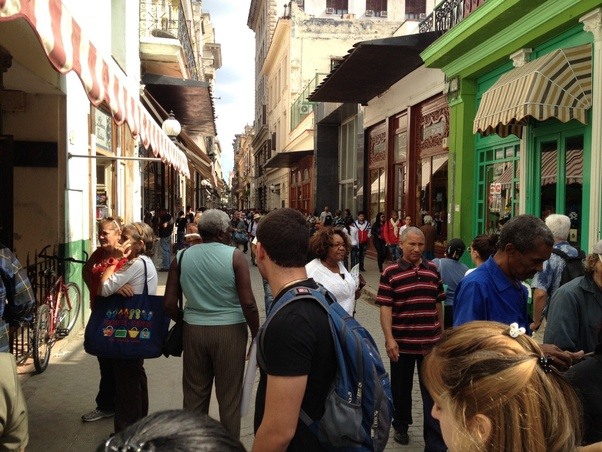 We stopped, and a waiter from the Hotel Ambos Lounge, pointing dramatically at the bar receipt, shouted in broken English that we did not pay for something!

No, we argued. We paid our bill!

Now what? Will they call the Policia? Imagine our embarrassment when we realized that we needed to pay for the extra cola I requested when my drink was too strong.

A little flustered as we stood on the busy pedestrian street, we sheepishly paid the waiter for the extra cola. He nodded, and left.

Havana is a bustling city with old classic cars (usually taxis) making their way down the narrow streets of Old Havana zigzagging around bici-taxis and pedestrians and dogs and chickens and even transport trucks that are barely making it around the tight corners of the narrow streets in Old Havana.

While we tend to avoid most big cities, Havana is different.

A stroll down Obispo St in Old Havana is a must-do, and you can relax at the end of the street at Plaza de Armas, the park in Old Havana.

Continue down Obispo Street to the malecon on the ocean where you can walk for miles, or take a look at all the classic cars parked on the street waiting to take tourists on a tour of Havana.

The Cafe de Paris was highly recommended, especially for fresh lobster at a reasonable price, so we stopped there for lunch. Don’t expect the same lobster as in Canada because it is not anywhere near as good. Overall, we were not that impressed with the Cafe de Paris.

Since I am a serious chocolate fanatic, we also went to the Museo de Chocolate.  The chocolate coloured statue outside the restaurant was amusing, until he moved and scared walkers half to death!

The Chocolate Museum itself however, is just a cafe – very commercialized, with surly unfriendly staff, and long line-ups (which apparently I walked right past and into the cafe). The chocolate and drinks were not impressive.

Old Havana is full of tourists and touts, but it is also full of charm with its old buildings, narrow cobblestone streets, music and classic cars.

We recommend you stay in Old Havana for at least two or three days, and take a step back in time to the 1950’s for an experience you won’t find anywhere else in the world, at least not that we know about.

Yes, do the Classic Car tour. It’s just fun, but do bargain hard.

*Next post – we leave Havana, and start our expeditions to other parts of Cuba, and they are indeed like expeditions.