D and I decided to rent a car and explore the beaches South of Buenos Aires. Stopping at beaches along the way, we stayed overnight in a few places, but it was late afternoon when we got into San Clemente and saw the beautiful beaches.

We definitely wanted to stay for a few days, and started looking for a hotel. For three hours we drove from hotel to hotel to hotel, on and off the beach, and all hotels were absolutely full. We were actually exhausted from jumping in and out of the car running in to ask if there were any vacancies. D was getting anxious and nervous about finding a place before nightfall. It was already past 8 pm.

She laughed, and agreed. As we drove around, I spotted two police vehicles down an alley, talking to each other through their respective driver windows. I asked D to drive down that alley and stop beside the closest police car. In half English, half Spanish, I explained that we had a “problemo”, and asked if they could help us. The policeman eagerly said,

He drove from hotel to hotel, and he and I would run in and ask about rooms. We thought surely he would give up after seven or eight hotels, but determined and tenacious he went to more and more hotels. At one point, he came over to our car and suggested D go in and check for vacancies at the hotel and we would wait. As he stood at my rolled down window, he asked a few questions about where we were from and other normal questions, then suddenly he leaned in and kissed me! I was so shocked that I could hardly speak, and at that moment D came back to say there were no vacancies. We moved on.

Finally, after another hour or more of running in and out of hotels, we came to one on the beach where they said they had something but we would have to wait. Thanking the police officer profusely, we sat in the lobby to wait. And wait. And wait. Exhausted, but grateful.

Hours later, we finally had a room, and even in a hotel right on the beach, Hotel Altair.

We met up with the same policeman, in civilian clothes, the next day on the beach and he seemed a little too friendly, so it was a bit awkward to politely decline his advances. In fact, he was rather insistent, and though we felt that we owed him for finding us a room, we did not owe him any more than a thank you. He seemed a nice enough fellow, but he was a bit of a cad and was trying to take advantage.

Returning to Buenos Aires a few days later, we began to explore more areas of Buenos Aires. Not to be missed is the La Boca area, a colourful area full of character and art. The brightly-coloured houses, the original works of art, and the street Tango dancers make it easy to spend a full day there. It was here that I bought an original oil painting of Tango dancers that I admire on my wall every day. This was also the start of ignoring touristy items and buying art or musical instruments on my travels to foreign countries.

The architecture of Buenos Aires was impressive, but this lady was even more surprising. She was not moving and there was no wind. You’ve likely all seen this before, but at the time, we hadn’t.

One day, we were on a mission to purchase some little item, and went into this tiny shop in Buenos Aires. As we waited our turn, we were talking about the Tango. What happened next was also surprising. The man in line turned and offered his hand…

We loved the Tango, Iguazu Falls, the El Tigre delta, and the beaches of Uruguay, but the one thing that always comes to mind about Argentina/Uruguay for both D and I is the fantastic coffee and orange glazed croissants we had every morning at a little cafe in Buenos Aires, near our hotel in the Recoleta area. It took a good twenty minutes for the coffee to be made from scratch, including grinding the beans, but neither of us have ever had a better cup of coffee before or since. Add to that the fresh homemade croissants, shining and warm, crispy on the outside with a hint of orange, fluffy and pillowy soft on the inside, and we were hooked every morning. Just the aromas of fresh coffee and fresh baking were unforgettable. I would go back to Buenos Aires just for those croissants and coffee. 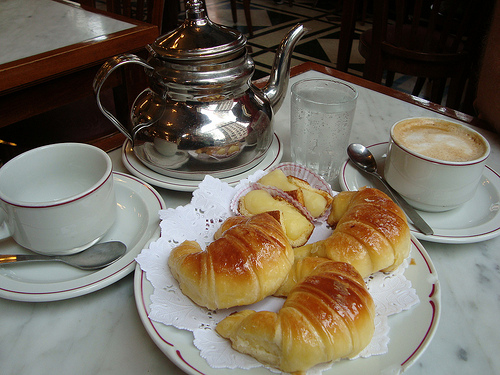 Getting lost in the maze of tombs and mausoleums in the Cementerio de la Recoleta where Evita is buried can take a few hours. Evita’s monument is a bit ghostly, but then the whole cemetery is full of good and bad heroes of Argentina’s past.

Our last few days in Buenos Aires were spent exploring the rest of Buenos Aires. We went out for dinners where we made the mistake of asking our host to choose a traditional Argentine dinner and ended up eating crispy chinchulines (chitterlings), briny riñon (liver), molleja (sweetbreads), sausage, ribs, black pudding, beef, pork, lamb and goat. Argentinians eat a vast amount and variety of meats, and traditionally these meats are grilled. Ask for Asado or Parallado, if you are a meat lover and have a great sense of adventure.

We went to the famous Cafe Tortini, elegant to be sure, and where I shook hands with what I think must have been the Tortonis et al.

Finally we had a lovely walk along the water where the evening lights of Buenos Aires bay twinkled back at us under a full moon.

[mapsmarker marker=”34″]
*If you’d like to learn more about cheap little-known countries and our crazy adventures, check out our BOOK here: TRAVEL TO LITTLE KNOWN PLACES

One Response to Argentina: Coffee, Croissants And Cads