The Shortest Runway In The World

Given our preference for little known and quieter places, we headed to the smaller islands of the Azores. The smaller islands also have the most rich green countryside, and the most genuine people. Of the nine islands of the Azores, Sao Miguel, Terceira and Faial are the three islands with the most amenities. Six of the nine islands – Sao Jorge, Pico, Santa Maria, Graciosa, Corvo and Flores are the smaller, least-commercialized islands.

We chose tiny Flores with its many lakes and waterfalls, and its abundance of flowers; it is known as The Flower Island. Flores and Corvu are also the most isolated of the islands, so sometimes they feel a little left out, and they have to keep a good stock of supplies on hand because planes are often delayed due to bad weather.

As we were leaving the island of Faial to fly to Flores, our guide, Humberto, made teasing remarks, or at least what we thought were teasing remarks. He was a wonderful guide, full of amusing anecdotes, joking commentary, and he was always cheerful, but with a glint in his eye and his delightful Portuguese accent, he sounded almost serious this time.

“The small plane shakes like Hell, but it’s safer than the big one. You know that Flores, she is at the enddd of the world! When you go there… you neeever come back.”

We laughed, if somewhat uneasily, and set off for the airport. As we waited, there was some tension amidst the small group of passengers (about 12) waiting for the Flores flight. We were, all together, the only passengers in the small airport with one ticket desk. The tension was a result of a discussion in Portuguese with the SATA Airline Attendant. She saw our confused expression and explained in her best English that the weather was bad in Flores, and that the flight would be delayed…

How long, we wondered, stopping short of becoming annoyed and demanding, so typical of North Americans. I had to remind myself that time means little in many countries outside of Canada and the U.S. The other passengers were obviously not surprised, or annoyed, and simply settled down to wait and visit. Four young people laughed and talked as one strummed on a guitar. We decided to read.

Twice the pilot came in, spoke to the airline desk attendant, and everyone started picking up their bags and lining up at the gate. Ten minutes later, the pilot came back to talk to the attendant again, at which time, everyone would sag down, and shuffle back to a seat with all their bags. We had no need for English at these times. The body language was perfectly clear.

A while later there was renewed anticipation and more discussion in Portugese between the passengers and the airline attendant. We leaned in with the others as they crowded around the counter, straining our necks to hear what we could not understand anyway – how curious human behavior can be.

Suddenly people began turning away and picking up their baggage as if to go home. We stood there confused, and before we could ask anyone, they were halfway out the door. Again attempting to speak English, the attendant explained that the flight was cancelled. Cancelled? Now what. There was only one choice – to get a taxi and go back to the hotel.

As everyone was leaving, the airline attendant called out and again said something in Portuguese. Everyone froze with suitcases in midair. Eyebrows raised. Then there was more hustle and bustle with people coming back in, setting down their suitcases to ask questions. Back and forth, back and forth, the discussion went on, in Portuguese. Straining to listen, hoping to understand a few words, we were still completely lost.

I asked one of the young male passengers what was happening, hoping that he would be able to speak English. He didn’t, but his friend did. He told us that the pilot said,  ‘He would try…’

Try? What did that mean – he would try? This was starting to sound scary.

Then later the young man explained… yes, the pilot… ‘would try to land in Flores, but if the weather was too bad, he would fly us back to Faial’.  Oh…

We boarded the little 18-passenger plane and sat directly behind the pilot and co-pilot with a full view of the cockpit. Several people were asked to change seats to create a better balance of weight in the aircraft. The weather in Faial was mild and sunny so it was hard to imagine that the weather in Flores, a 35-minute flight away, could be so terrible, but we were not in the air very long when the plane began to dance around as it was buffeted this way and that in the wind. The words of Humberto kept playing over and over in my mind.

We were to land in neighboring Corvo first and as it came into view ahead of us, I was relieved to see land. Bouncing around erratically over all that expanse of ocean was a bit enervating. The young fellow that had helped me in the airport kept assuring me that the pilot was very skilled, and that even though this was a small plane, it was, in fact, a better plane than the larger ones. All the way he had been trying to convince me to relax, and his genuine concern was something I had not experienced from a stranger in a long time. And he did not stop talking. He would apologize, stop talking for 30 seconds, then start again. He was charming but annoying because I was feeling decidedly queasy and my ears kept plugging. I tried to talk but found it difficult.

I was watching intently for land, then watching the odd angle from which we were approaching the runway. If I said one more word, I was afraid that I might be physically ill. At that moment, I had an inspiration – pulling out my mini-tape-recorder, I told the young man that I was a writer, and asked him to talk. Suddenly he was flustered and could barely speak. He rambles, then tells me a little love story about this wonderful girl he met and how he is going to visit her at her parent’s home in Flores. Life exudes from every pore of this cheeky and energetic  young man – but then, he is twenty and he is in love.

Each grade of descent seemed to cause the plane to oscillate more irregularly, and my stomach was doing somersaults! I was surprised when we touched onto the runway in Corvo and only bounced a few times before the pilot screeched on the brakes.

We stopped only a few minutes at Corvo, taking off for Flores which was within easy sight across the water. Now the wind beat wildly against the plane and it rocked the little plane to and fro as it fought to push forward.

We hit even worse weather as we were getting closer to Flores.

The little plane jerked and bobbed, twisted and rocked, and as we approached what must be the shortest runway in the world, I swallowed back my apprehensions. It looked about twenty feet long, with a steep cliff at the end of the runway, dropping into the sea.

Again as we dropped altitude the plane lurched more dramatically both forward and back, and from side to side. The wind slapped and shook the tiny plane till it looked like a drunken butterfly trying to set down.

As it twisted and curled, the image of a remote-control plane entangled in twine came to mind. The plane contorted and curled and shook up, down, left and right. The arms of the passenger seats were squeezed tight by white-knuckled hands as everyone wondered how the pilot could control this besotted, cock-eyed miniature airplane so that it would even line up with the runway.

Both the pilot and the co-pilot had a look of strained intensity as they jerked their heads quickly from instrument panel to runway and back again. Switches and gauges were adjusted rapidly and repeatedly. Their eyes were large. High as a kite, and three sheets to the wind began to have new meaning for me. 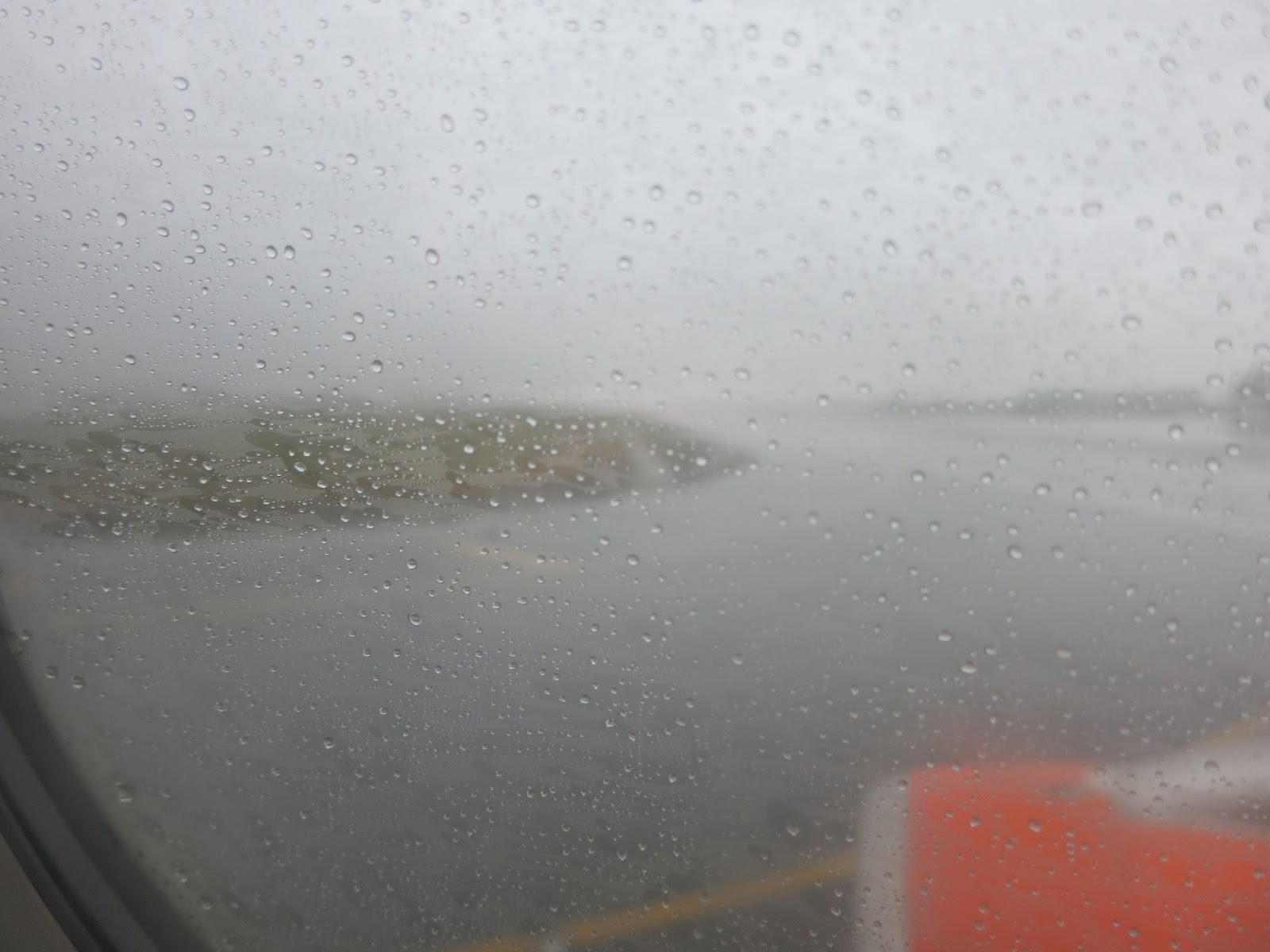 Still slamming side to side erratically, the pilot steadily lowered the plane, but each time he descended, the plane would ricochet more violently. As we got closer to the ground, it became even worse. At the very last minute, the pilot pulled up fiercely on the yoke and we rolled up and to the left like a hawk veering away from a tree.

The pilots looked at each other, and nodded. They would follow that delightful piece of drama by circling around to line up for a second attempt at landing.

The passengers were intensely silent.

Again we approached the runway, and as we got bounced and shaken in this tiny plane, I was sure the side panels would be rattled completely off their joints. They were visibly moving! The lower we descended the more bizarrely this aircraft fluctuated in every direction.

The pilot knew he could not land, and again, at the last second, he pulled up and veered wildly over and above the runway. That’s when I noticed not only how short the runway was, but at the end of the runway just how steep the rock cliff was, as it plunged straight down into the ocean. Wow.

For a third time, we flew around the island and lined up with the runway. Yet again, the plane did the old bobble and jig, like a wild dancer that couldn’t keep still.

I fully expected that the pilot would lift the nose and go back up at any moment, and we would return to Faial. But no, we were almost on the ground. How could he possibly land when the plane would not remain level? This was impossible!

We landed on one wheel – the right wheel – first.

Then we bounced to the left wheel, then back to both, and then the mad violent screeching of brakes began. Through the easily visible cockpit, all I could see was water, coming closer and closer. We were going to plunge over the cliff and into the ocean.

(and I envisioned this…)

The whole plane of passengers burst into cheers and applause and laughter.

“What a ride! Better than a Circus ride!”, my young passenger friend squealed as he released his grip on the seat and burst into a broad, I-wasn’t nervous-at-all grin. I smiled warily back.

We were on land. It was one of those “I could have kissed the ground” moments, but my head was spinning and my stomach churning. As I turned to go into the airport, I looked back at the plane and could hardly believe my eyes. The front wheel of the plane was a foot from the edge of the cliff!

Then it was all I could do to stumble into the airport.

This may or may not be the shortest runway in the world for non-commercial airplanes, but with the cliff overhang, and wild storms, it seems safe to say that it is one of the most dangerous.

Little did we know at the time that this was only the beginning of our crazy adventures on Flores.