With My Eyes Closed

“Want to go to Argentina?” I said to my friend D.

“Just a month. There is a great price out of LA.”

“A month! I can’t get that much time off work.”

“Are you sure? Have you asked?”

The next day, she called to say they said YES. I think she was in shock. But she was excited and so was I! Since we were both ballroom dancers, the idea of going to the birthplace of the fantastic Tango, was too good to be true.

But on the Calgary to LA leg of the flight, I suddenly became very ill, with violent cramps and I could not stay out of the bathroom. How embarrassing and awkward up in the air in a tiny bathroom with people waiting to get in! No sooner did I come out and sit down, then the cramps would start again and I would have to rush back in. I remember when we were about to land, the flight attendants insisting I come out of the bathroom immediately! I told them I couldn’t, but they kept banging on the door. I had little choice but to come out and as we were descending rapidly, I quickly took a seat next to the bathroom praying I would not have to go back in before we landed.

Finally, D suggested I take an Imodium. How foolish that I hadn’t take one sooner but I was just too sick and weak to even think. I could barely keep my eyes open.

The Imodium was working, but D and I still had to navigate through horn-honking LA airport, Atlanta airport shuttles, and finally to our accommodation in Buenos Aires. By the time we got to Buenos Aires, some 10 hours from Atlanta, I was feeling much better.

In Buenos Aires, we had rented a place called the Tango Garden, Italian Rococco style, very reasonably priced too at $22 per night for two bedrooms, a fully-equipped kitchen, and a sunlit centre atrium garden open to the sky. Marble and granite floors, 20′ ceilings, huge rooms and double doors were everywhere.

Owners, Juanita (Mother) and Jessica (Daughter) made us feel comfortable and welcome, answering our questions about BA, and showing us interesting places on the maps.

D’s bedroom was upstairs with the green double window you see in the upper part of this photo below.

I could call to her from the kitchen window which was across the atrium.

Then there was the bonus of a lovely Tango Studio at Tango Garden with shiny wood floors and floor-to-ceiling mirrors where we also got tango lessons!

I remember the Tango Instructor immediately pulling me tight to the chest and telling me to close my eyes, explaining that the “Follow” must be an impeccable “Follow” sensing the Lead with the hands and body, not with the eyes. A man could go any direction, left, right, forward or back – you must not anticipate anything. It’s about sensing the slightest change in balance. He told me to close my eyes.

“No. No. No. No. Yes, Yes. No. No. Yes. Better. Yes. No. Yes. Yes. Yes! Yes! Yes!” Trying to forget my discomfort with the close physical contact that is the absolute norm with the real Argentine Tango, I focused on relaxing and “feeling” the lead. I submersed myself in the magic of the mesmerizing music. It was remarkable. I could follow with my eyes closed, and not miss a beat. A simple but extraordinary lesson!

Armed with what we thought was a solid background in ballroom dancing and a few Tango lessons, we were inspired to attend a Milonga, a traditional Argentine Tango Dance centre. Milongas are spread commonly throughout Buenos Aires: http://www.hoy-milonga.com/buenos-aires/listing.php?said=938745234509

Exuberant and excited, we arrived at the Milonga that night and sat down at a table. It was out in the barely cool open air with a dance floor in the centre. 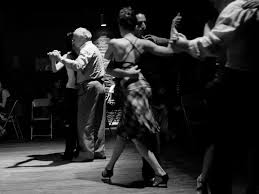 We watched in unmitigated awe and pure admiration as couples gracefully glided around the floor with perfection. They danced with such a natural ease, so unlike the Tango lessons we had at home. Close dancing, cheek to cheek, eyes down and totally immersed in the music. Most of all we admired the elderly couples as they skimmed and spiraled across the dance floor as elegantly as any dancers we had ever seen. It was so endearing – no, captivating, to watch these very mature and advanced dancers. We were totally enthralled. Young or old, it did not matter, they were all accomplished Tango dancers, moving with the slow sensual movements and riveting passion of the sexiest and most flirtatious of all dances – the Argentine Tango. This real Tango is amazing to watch – all at once it is elegant yet extravagant, striking yet soothing, intense yet full of delicious pauses.

After watching a while, I became afraid that someone would ask me to dance, and I wouldn’t be able to follow. Even with my eyes closed, I felt that I would not have a clue. Yet still, I would have liked to try. My heart stopped as a man approached our table. He bowed and asked D to dance. Watching anxiously, I hoped she would do well, but before the dance was over, he returned her to her seat as gentlemanly as could be, and quickly walked away.

“What happened?” I said.

Quite blandly and matter-of-fact, she said, “He told me he needed to find someone who could dance.”

We were shocked. Never had anyone in either of our ballroom dancing careers said such a thing! Indeed, we were rather popular as a first choice for all the ballroom dances at home.

Well it was not so in Buenos Aires. In the end, we had to giggle at our bumbling incompetence. Nothing ventured, nothing gained, and in this case a big dose of humility had been gained. As usual, practice, practice, practice and practice some more is the only way to achieve skill at any sport or activity. We also learned that the International Tango is completely different than the Argentine Tango.

So intense, so beautiful…

Carlos Gardel was to the tango what Louis Armstrong and Elvis Presley combined were to popular music in North America. Carlos is legendary not only in Argentina, but all over the world.

Watch and listen, if only to hear some original tango music…

[mapsmarker marker=”34″]
*If you’d like to learn more about cheap little-known countries and our crazy adventures, I’m writing a book to tell you exactly that.
Sign up below to hear more about the book, and get it FREE in the first 24 hours after it is first published.

4 Responses to With My Eyes Closed