When a friend invited me to join him in New York to go the opera (his big obsession), I was hesitant. I was not that keen on opera, or even on a big city for that matter. We’ve always taken a ‘pass’ on big, busy, noisy cities, preferring the warmer local flavour of smaller centres. I hummed and hawed, then remembered that I could use my Air Miles to fly to New York. He said he would look after everything else.

Quite certain that I wouldn’t even like New York, but giving it a chance, I landed in New York at dusk. I actually got goose bumps seeing the New York skyline for the first time. I had heard about the skyline, but couldn’t imagine it being as special and beautiful as it was. This city was already different.

He had booked our hotel and I arrived first. The outside of the place was quaintly elegant; the inside was modestly nice, but the front desk guy was cranky and grunted answers.

When I went to find the elevator that he gestured to vaguely, I found one of those ancient scissor-fold collapsible gates that I could barely open, and I had to keep the gate open with one hand, purse draping down heavily, while attempting to drag my suitcase over the rough grooves with the other hand. Awkward at best.

Once inside the tiny elevator compartment, I didn’t even know how to operate the thing. The big flat buttons didn’t seem to work, and since I was not moving, I didn’t know what to do. I had pushed every button. Standing there like an idiot, close to panic, it occurred to me to check that the folding door was securely closed. It was. Then I saw a second door. Hmmm… maybe I should try closing that. I did, and pressed the button. Sure enough, with a lot of creaking and scraping, grinding and groaning, the claustrophobic little box slowly began to move up.

A hard wrench on the doors was required to get the elevator open, then as I was struggling to pull my suitcase out, I tripped over another ridge in the doorway of the elevator, fell over top of my suitcase, purse flying, and arms flailing like a wild woman. Glancing around to see if anyone was watching my ridiculousness, I picked myself off the floor, relieved that there was not a soul in sight.

With my big old-fashioned key, I turned the lock of the room. Attempting to get in, because the door would not open all the way, I wiggled in and looked around. There was no more than 6 inches between the side of the bed and the dresser, and maybe 4 inches between the end of the bed and the old closet. There was nowhere to put the suitcase. Nowhere.

I fell onto the bed exhausted. What on earth was he thinking to book this awful place?! I knew that hotels in New York were expensive, and I’ve stayed in a lot of 3 star hotels and quaint inns, but this was bad – really bad.

It was when I saw the cockroach creep under the door that I burst into tears. Calling home, I sobbed to my sisters about the situation. I was ready to change my flight and go home.

Curled up on the bed, cautiously watching for bugs, I waited, frozen on the bed, for my friend to arrive. A few hours later, he called.

“I cannot stay in this place one more minute!” I said. He agreed, apologized, and we booked another hotel, a nice hotel right across from Central Park.

We stepped out of one of those infamous yellow cabs to go into our new hotel. 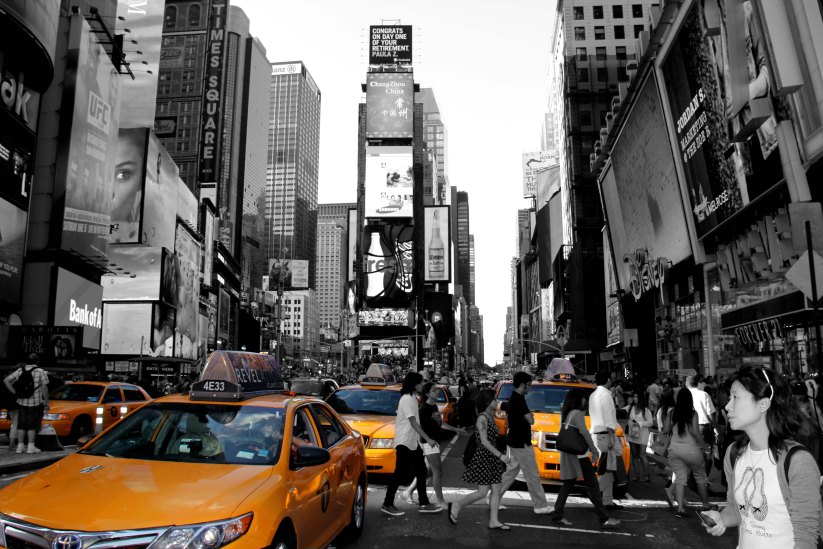 We followed and watched him running full speed down the street, cut across at the next lights, and bang on the side window of a taxi driver. I was sure I would never see my purse again, and how he knew which taxi to run after of the million yellow cabs on the street, I will never know, but a second later my purse in his hand, he was sauntering back to the hotel. I could hardly believe my eyes! And in New York! Looking out from our hotel window, I was surprised that Central Park was so big and beautiful. It offered a green escape of tranquility amidst the honking yellow cabs.

We enjoyed long walks around the park, incredulous at its size. 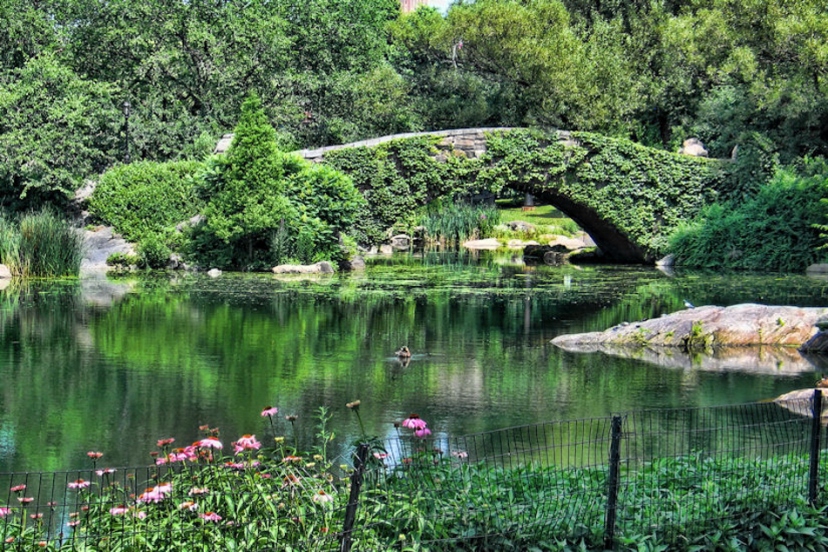 We went to an opera every day, a few plays on Broadway, and enjoyed delicious meals. It surprised me how we could walk around safely at 4 am in the morning, browsing in the shops, stopping for coffee or a snack like it was 2 in the afternoon.

The New York Metropolitan Opera House (also known as The Met) is a gorgeous building.

One day during intermission at the New York Metropolitan Opera House, I looked at the block-long line-up for the Women’s Restroom. Do they only have one washroom for this huge place, I wondered? This was ridiculous. And I really had to go!

Then I looked over at the much shorter line for the Men’s Room, and I decided to line up there. The tuxedo-ed men in the line turned in utter astonishment. They poked each other, and whispered, staring without hesitation. I ignored them.

As I stepped into the Men’s Room, double-takes turned to whispers of,

As I sat in the cubicle of the men’s room, another man at the sinks said,

“Well, did you see the line-up for the women’s restroom?! I don’t blame her one little bit.  Good for her!”

Mutterings from more men expounding on their disgust or understanding, depending I suppose, on their level of tolerance, rolled off tongues at the sinks and urinals.

Smiling, I walked smoothly up to the sink amid the smothered gasps of men at urinals, washed my hands, checked my hair, and head held high, pranced right out as new men in the line-up looked, then looked again with eyebrows raised and eyes as bright as if they had just seen a ghost.

My friend was shocked but amused when I revealed what I had done. He said he just hoped I wouldn’t make the next morning’s papers! He could see it all now, he said,

Another evening, we were among the masses of the respectable and well-dressed, graciously coming down the curved staircase of the New York Opera House, when my friend burst into full boisterous opera song! He belted out a tenor opera in a powerful and passionate aria. First I was shocked, then mortified, then astonished, and finally proud. He had a beautiful voice! I could have been with Pavarotti! Everyone stopped to stare, then listen in amazement and admiration.

That’s the kind of thing that happens in New York!

New York is a vibrant and exciting town. Nothing surprises people because you see so many unusual and intriguing things just walking down the street. If you’re a little bored or restless, try New York; if you’re looking for something, but not sure of what you need, try New York. It is guaranteed to stir your soul.

And if you’ve never been to an opera, it’s well worth trying. I covered my ears whenever previously hearing opera, but developed a love for male operatic tenor voices like Pavarotti and The Three Tenors after attending live operas in New York. Of course Broadway Plays are another must-see.

Frank Sinatra singing “New York, New York” will always remind me of New York. Perhaps New York is not like most big cities, and one might become a little more open-minded when it comes to rejecting big busy noisy cities outright (wink). It is indeed, an exception.