To get to our house sitting assignment, near Toulouse, first we had to catch the hotel shuttle bus from the hotel to the Marseille Airport, next catch the big bus to Marseille, St. Charles Train Station, a 25 minute ride for 8E (12C) each, with a bus driver that liked to take corners at high speeds, rocking us into each other and tipping the top of the bus to near the sidewalk.

St. Charles Station was huge, but there was a nice view of Marseille’s Basilica Notre-Dame-de-la-Garde high on a hill, that is seen as the guardian of the city.

St. Charles Train Station was grand, and inside it looked like a mall with clothing shops and restaurants.

There was even a piano in the main hall with a sign that invited anyone to use it. Light classical music filled the air as people sat down to play.

It took a while for us to find the Ticket Booth, which was like a bank, complete with about 10 tellers and a line-up. We had E-tickets paid for, but they still had to be turned in for actual tickets.

When I finally got to the wicket, the teller said it was a different credit card than the one used for the booking online, and it must be the same credit card!

Now apparently, we had to validate the tickets, which would be subject to a big fine by the conductor on board, if we did not validate them. We asked at an information booth. He said you validate at the yellow machines.

For 20 minutes, we tried to read the French instructions on the yellow machine, but it was just too confusing. Back to the information booth. With a good deal of kindly patience, the man came out from behind the information booth and over to the machine. As he tried to figure out all the options himself, and we were working through the process, he looked at our tickets, and burst out,

“But you’ve already got tickets!” Yes, we replied, we only need to validate them.

“But you must go to the yellow machine”, he said.

“This is a yellow machine.” I said.

“No, no – the little yellow machine – over there.”

Now we had to wait to see which Quai (platform) our train left from at departure time of 13:24 (depart), which is only posted on the overhead screens (just like at airports), half an hour before the train departs…

Then we had to find the correct train Numbre, then the correct Voiture (car), and finally the correct Place Assise (seat numbers)!!! Everything is written in French, of course.

Here is a picture of the ticket. Can you find the Quai, the Depart, the Numbre, the Voiture, the Place Assise???

We had no idea where the luggage would go on the train. It turns out there are large overhead bins, but our suitcases were too bloody heavy to lift up there. There were a few other spots to put luggage at the back and in the middle – room for only 3-4 suitcases, so they filled quickly. The walkways between the seats on a train are narrow like on airplanes so maneuvering large suitcases down the aisles is not easy, especially with a back-pack on your back. There are no porters. The seats were quite nice and comfortable, and an expensive snack cart came by later. The bathrooms were tiny and stank so bad I had to hold my breath.

If we had only that one train to our destination, it might not have been so bad, but we had to change trains twice in two different stations. In the first instance, we had only 11 minutes. 11 minutes! To pull out our luggage, drag it off the train, go to a different platform, different train, different car and different seats.

Plus before you get on a train in Europe, you must validate your ticket at that “little” yellow machine. In addition, we had to go down a set of stairs (with all that luggage), to go under the train tracks, then up a set of stairs (with the luggage) and race down the platforms to find the right platform, then the correct train, then the correct car on the train, haul the luggage on to the train, find a place to put the suitcases, and find our seats. No escalators. T was sweating bullets. 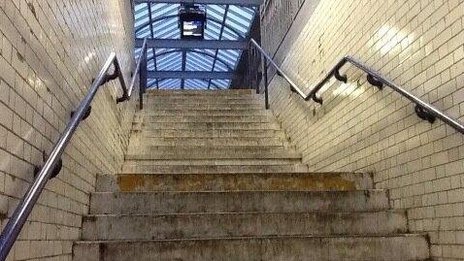 At the next stop, we had to change trains again, and this time we had exactly 5 minutes! No stairs, but we had to run a long way down to get to the right platform and correct train. Now T was soaking wet.

We arrived at our destination finally, and there was our smiling host, where we would house sit for the next two weeks. We were so exhausted that we could barely speak.

T said it only could have been worse if we were in India and had to ride on top of the train clutching our baggage!