Ireland: What You Need To Know

By travellittleknownplaces | October 3, 2022 - 7:44 am |October 3, 2022 All Posts, Ireland
The first thing you need to know if you’re driving around Ireland is that there are no traffic lights. That’s right, no traffic lights. Instead, there are 50 million roundabouts.
On arrival the ten or more roundabouts just to get out of Shannon airport caused us great anxiety. As a Canadian, driving on the left side was plenty enough challenge, but to make any attempt to understand the rules of a roundabout at the same time was well nigh impossible! Is there one lane or two, sometimes it’s clearly marked; other times it is not. Do you use the outside lane or inside lane to take the second exit? The whole experience was too scary with cars whizzing by at astonishing speeds.

By the time we left Ireland, however, we were beginning to appreciate what a time saver roundabouts were, and how they kept the traffic moving much better than lights. This seemed much more efficient than the North American system. Someone should take this idea to Canada and the U.S. – right after they teach us how to use them! Of course the big cities have some traffic lights, but there are still hundreds of roundabouts in city and countryside alike.
The next thing you might want to know is that the castle stays are worth the extra money, especially if they are part of a Flight, Car and Castle package. We used Dooley Vacations.  Castles are just like you might imagine – grand and fairytale-like. Also, right now, Toronto to Dublin is $543 Return on
Airfare Watchdog. That’s cheaper than a lot of flights within Canada.
The best way to see Ireland is by car. Our little car served us well, and Ms. GPS, Molly, as we called her, was a life saver most of the time. We never could have found our way without her. Even which exit to take on roundabouts was totally confusing.
She often took us down what looked like a back lane or farm road to us, but she got us to our destination. Can you believe these “highways”?

Only once were we ready to throw Ms. Molly GPS out the window! That was in Cork, where she repeatedly sent us in circles back to the same intersection that was under construction even after we asked for an alternate route. We circled for about 2 hours there when we were just trying to “get through town”.
You should also know that Ireland is basically all rock. We didn’t expect it to be so incredibly beautiful though. The brilliantly green hills, the black rock, sometimes dramatic, sometimes dangerous, sometimes barren and desolate and other times set against blue water.

It’s also bloody windy in Ireland, much of the time. You can see just how the trees are effected by the odd angular splay of the branches. Wind and rain and cold, but somehow it is also profoundly beautiful and dramatically impressive.

Driving on the left takes a little getting used to, but is not difficult if you stay out of the big cities. The roads are narrow and winding though.

We were warned to tie our hub caps on and to be prepared to lose a side mirror or two. Neither happened, but on a narrow highway with a cliff on one side, we came close to losing our side mirror numerous times. You often find yourself braking suddenly and pulling into the trees on the side of the road to let an oncoming vehicle squeeze by. One-way bridges too can pop up out of nowhere.

The other major obstacle on roads is sheep. We lost count of the number of times we had to screech to a stop because sheep were wandering all over the highway.

One little herd of sheep was pretty confident that they owned the road.

Don’t worry about the seeing the major tourist sites. Just drive to the end of the road you’re on and find a charming little town. Stay 3-4 days in one place, go to the pub, and get to know the locals. You’ll have a blast.

Photo Source: Google Images
Forget restaurants in Ireland; they are few and far between. The pubs have great food and a better atmosphere anyway, and most of them serve food. The food was excellent in Ireland in general, but stay tuned for a separate article on food and drink and um… hand-slapping.
The next thing you might want to know is that the big cities are just like any other big city in the world, and you will have a lot more authentic experience of Ireland staying in smaller towns and cities, and even villages. Even the tiniest of villages has a local pub, or two or three.

Drinking is just a natural thing to do for the Irish, but it has as much to do with socializing as with anything else. Enter any Irish pub and you will find everyone friendly and laid back. You’re likely to hear a lot of laughter too. The Irish are exceptionally self-deprecating. They make an effort to be modest and like-able to all people, and bragging is not usually heard. A compliment may be brushed off with a smart joking remark, as though they were not worth the compliment. It reminded me of my Canadian father who would, upon receiving a compliment, reach into his pant’s pocket say,
“How much do I owe ya?”
One other thing you might care to know. Irish men drink. A lot. They are jolly and cheerful and friendly, always looking for a laugh and never hesitating to tease the life out of each other or anyone.
The Irish woman, we found, were not so cheerful, much more serious, and occasionally downright techy. Perhaps, we mused, it was because their men were always “havin’ a pint down at the pub”! They love their music and song too. 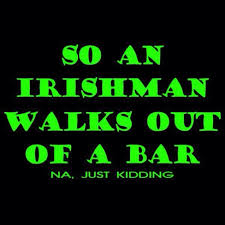 P. S.
T is Irish his own self, as they say in Ireland, so we can get away with the honest-to-God truth about the Irish.
[mapsmarker marker=”3″]

*If you’d like to learn more about inexpensive little-known places and our crazy adventures, go here to get the ebook, Travel To Little Known Places.
http://www.amazon.ca/dp/B00UZ9LC9Y