From Beijing, we travelled inland south to Xian.

2200 years ago, Emperor Quin Shi Huant, one of the most famous emperors in China, was losing a battle with his enemy. He developed an ingenious plan.

He asked his soldiers to build an army of clay soldiers exactly like his own army, with soldiers of all ranks, as well as horses and chariots. The thousands of soldiers were even painted in colour. They are known as the Terra Cotta Warriors.

Lined up at a distance, this massive army appeared foreboding and frightened the enemy. What a simple but clever idea.

Even more incredible, however, was that he ordered that upon his death, all of his soldiers and army be mummified inside the clay soldiers! And this was done.

A few years ago, workers were digging a well in Xian when they discovered the wooden vaults that preserved the thousands of clay soldiers.

The Terra Cotta Warriors have been carefully excavated from deep in the ground and they are on display for the public – a unique and extraordinary exhibit. Highly recommended. 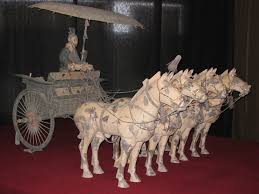 I ventured out on my own in the town of Xian one day. Walking around in the small town felt very strange. I was openly stared at.

I was the only Westerner on the street, and people stopped dead in their tracks to stare, obviously surprised. It was a look of fear combined with pure curiosity. Some giggled in shock and surprise.

I did tower above everyone, although at a mere 5 foot 3, I am considered short in North America. The Chinese idealize speaking English, blonde hair, blue eyes and pointed noses. With light brown hair, a bigger nose, and white skin I stuck out like a big white horse among hundreds of little brown Shetland ponies.

It was obvious Westerners were not common, and walking about for an hour or so along main streets, I did not see a single other non-Chinese person.

It gave me a new understanding of foreign visitors or new immigrants  and their experience in a new country. Everyone looks at you, everyone is watching you, everyone is cautious around you, hesitant, curious yet distrusting. Some pointed, others looked like they wanted to touch you to see if you were real.

You cannot speak to anyone because you do not know the language. Every person around you is tiny and has a a different colour of skin than you do and has black hair.

It reminded me of this photo…

In Beijing, I did not experience any of this because there are many tourists from all over the world, so the people are used to people of other nationalities and cultures, but the people in Xian look at you like you are from outer space. It is a strange isolating feeling.

In modern Beijing, you see mostly modern cars, but thousands of bicycles, and bicycle-pulled rickshaws (30 yuan or C$6), with an occasional horse and cart.

However in the smaller cities, like Xian, and in the countryside, you see horses and carts, overloaded small trucks, and mini-semi-trucks interspersed equally with cars.