China Was A Lot Different Than I Thought It Would Be

I didn’t even want to go to China! Too many people for me, I thought, but then I was invited to join a friend who had been there many times on business, so that was it.

Two weeks later, I found myself in China.

First of all, Beijing was not crowded. I fully expected wall to wall people, being unable to walk easily down the sidewalk, crushed within a crowd of people, panic attacks setting in, as well as pagoda after pagoda, temple after temple, but it was none of that.

In fact, it was a big city, but it was no different from any North American city. It looked like most large cities: full of modern skyscrapers – mostly western, McDonald’s on the corners, and there was very little typical Chinese architecture, but one thing was different – somehow it was a quieter than North American cities.

There was something so different about the way people moved in China. Slowly but purposefully, not fast but not slow. Considerate and polite, moving out-of-the-way, stopping to help other people, stopping to help me carry bags up the stairs.

The other thing that was different was that they did not talk a lot as they were walking. There was no shouting or loud discussions. They were relatively quiet as they moved consciously around.

Yes, there was traffic, and multi-lane streets, and thousands of motorcycles and bicycles. Again though, the efficiency with which they could manipulate their vehicles into the tiniest spaces between or around cars, comfortably passing by within a few inches, was absolutely astonishing.

And astonishing loads on bicycles… and tricycles…

We were lucky enough to stay in a nice apartment with L, a local Chinese business woman, and we remain friends to this day. She wrote her address in Chinese on a piece of paper so that I could just show it to the cab driver to get home again. And she gave me a cell phone for emergencies.

The brown smog intrigued me though. It was unlike the grey smog of North American cities.  Indeed, it did not seem like smog: there was no smell, and no burning in the eyes or nose. The smog-fog of early mornings was white, delicate, and mist-like, heavy with humidity, but by afternoon the smog was an orange-brown colour, which I discovered, is actually half smog and half dust blowing in from the Gobi Desert.

One evening as the sun was going down, and in fact it was quiet in downtown Beijing at night, the sky became frosted in a brown glow shimmering over the mountains and hills and sun. It was beautiful and dreamy, especially later that evening as moonbeams trickled down through the soft brown over a brilliant white moon. Gorgeous. Mesmerizing.

The mountains too, were dreamy. In the day, the distant mountains layered over top of each other in a soft silhouette. 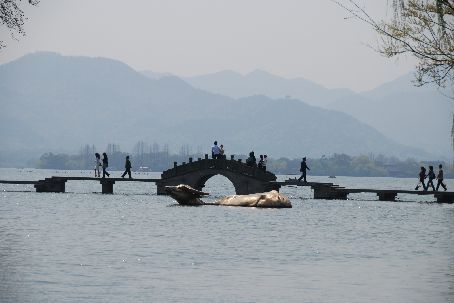 By evening, the mountains drifted across the sky as though a soft wind was ushering in the night…

*Enter your email above to WIN a TRAVEL BAG and free access to all our stories and photos.