In The Azores, the terrain consists mostly of rolling green hills with vegetation that was an odd cross between desert cacti and tropical fern – an unusual mixture.

But most of all, I was enthralled that my favourite flower, Hydrangea was literally growing everywhere!

Hydrangea flowers create a magical highway lined on both sides with purple and blue flowers, like something out of the Wizard of Oz. How awesome is this!

The Hydrangea bushes kissed the entire edges of rivers and lakes, flowers dancing in the water reflections.

Terceira is often called the Lilac Island of the Azores because of the pink and blue flowers of the Hydrangea that literally cover and divide the land in all directions. Hydrangea hedges grow wild over the entire island.

The immense variety of plants on all of the Azores Islands would intrigue the most discriminating botanist or nature lover.

Recent Japanese scientists visiting the Azores were astounded (staring at their guide in disbelief) when it was pointed out that the Japanese Cryptomeria, that grows as a small bush in their country, grows to giant trees in the Azores.

Along the coast of many islands the lava rock has formed natural swimming pools that sparkle with brilliant green-blue water. Panoramic views from along the high volcanic hills were nothing short of scintillating as they encompass ocean, sky, land and flowers.

On the highest hill or along the coast of almost every island you will find an old fort from the 16th or 17th century. These impressive stone-walled structures that were used to repel enemies and protect from pirates, provide beautiful  panoramic views of the island and\or neighboring islands.

But far and wide, across rambling hills, in city and in country, you will see miles and miles and miles of Hydrangea hedges… gorgeous lilac, pink, blue and mauve flowers glittering in the sunlight, tossing their beautiful petals in the wind like movie starlets.

The Azores have been called the Flower Islands for good reason. It is as though someone flew a huge flower-bomber plane full of flower seeds that he just dropped all in one spot – on the islands of the Azores.

Hydrangeas with their 12 inch blooms are by far the most splendid though, and bushes stretch for miles around in lavish blushes of blue, pink, and purple.

It is said that the fragrance of all of the flowers is so intense in Spring on the Azores that passengers and sailors on ships passing near the coast are impassioned and then overcome with the ambrosial intoxication of the bouquet’s scent. 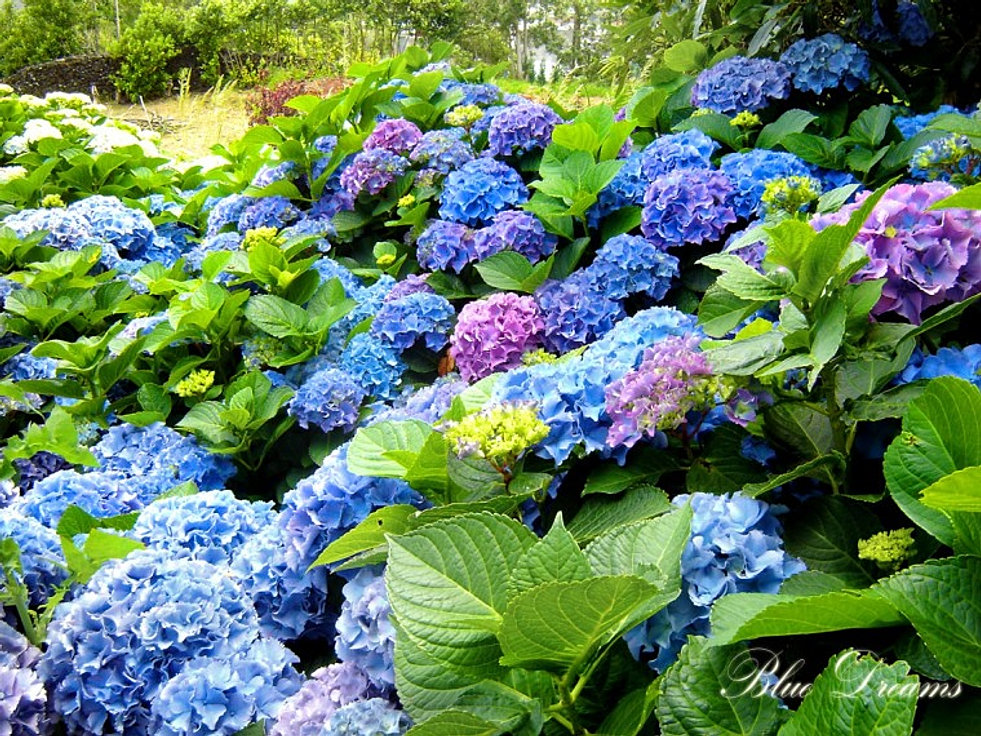 Can you imagine sailors and passengers swooning and keeling over like drunken fishermen as the powerful perfume of billions of flowers engulfs and overwhelms them?! Woohoo!

These are not manicured gardens; these fields of flowers are growing wild and natural, covering hill and dale everywhere you look in The Azores.

The Azores was named the No.1 Global Sustainable Destination of 2014. The entire group of the 9 Azores Islands is like a garden of natural wild plants.

5 Responses to Drunk On Flower Pheromones